The Downtown District has an enormous investment in maintaining the public realm throughout Downtown.  Through interlocal agreements with the City of Houston, the District has also taken on the responsibility of the redevelopment and continued operations of two signature spaces- Market Square Park and Main Street Square- which receive increased efforts in order to maintain a pristine level of cleanliness, a high level of operational reliability and a demonstrated commitment to providing programmatic support.

The site of the park has been at the center of Houston’s history since the city’s founding by the Allen brothers in 1836. Originally called Congress Square and renamed Market Square in 1839, the plot was home to four different City Hall buildings between 1841 and 1960. After the 1904 City Hall burned down in 1960, the site was converted into a parking lot until the 1970s, when the Junior League of Houston helped transform it into a green space. In the late 1980s, arts nonprofit DiverseWorks coordinated a renovation of the park that incorporated works by local artists throughout the space. After years of neglect and decline, the Downtown District, Downtown Redevelopment Authority/TIRZ #3, City of Houston Parks and Recreation Department and community stakeholders reimagined and redeveloped Market Square Park, which reopened it in its current form in August 2010.

Today, Market Square Park is an active, urban destination for live entertainment, public art, cultural programming and outdoor dining. The park has been host to hundreds of events such as Houston’s 175th Birthday celebration, comedic wrestling by Doomsday Wrestling, amazing local and regional musicians and fan favorite Puppies for Breakfast, an annual dog-centric festival, just to name a few. Moreover, its 2010 reopening served as a catalyst for growth and development in the surrounding neighborhood: In addition to new adjacent residential properties Aris Market Square (opened 2017), Market Square Tower (opened 2017) and Brava (estimated completion 3Q 2022), the park’s reopening inspired the revitalization of Historic Market Square and the nearby Main Street corridor as a neighborhood for living, culture, food, drink and nightlife.

Main Street Square is built between two light rail stations in the 900 and 1100 blocks of Main Street. Trains zip through the center of the fountain in a light rail configuration like none other in the United States.

The METRORail and fountain water jets are the focal points of the square with the trains running through a 250-foot-long, eight-inch-deep reflecting pool. Thirteen jump jets with streams of water arc 40 feet into the air above Main Street and 39 smaller jets animate the perimeter of the pool. Trains stop on either side of the water features to pick up passengers. Masterfully planned landscaping invokes the feel of a green garden, full of flowering plants, trees and plenty of shade. Walkways display bold pavement designs, canopies and public seating.

Public art also dots the Square with Flyod Newsum's Planter and Stems located on the corner of McKinney and Main. Slightly wild and wacky, the sculpture's meaning is all Houston. The center section—the planter—is meant to represent the entrepreneurial class of businessmen who built Houston (think Jesse H. Jones) while the surrounding stems are the small- business men who helped.  In addition, Art Blocks projects such as the Main Street Marquee and WindowWorks are located in this three-block area. 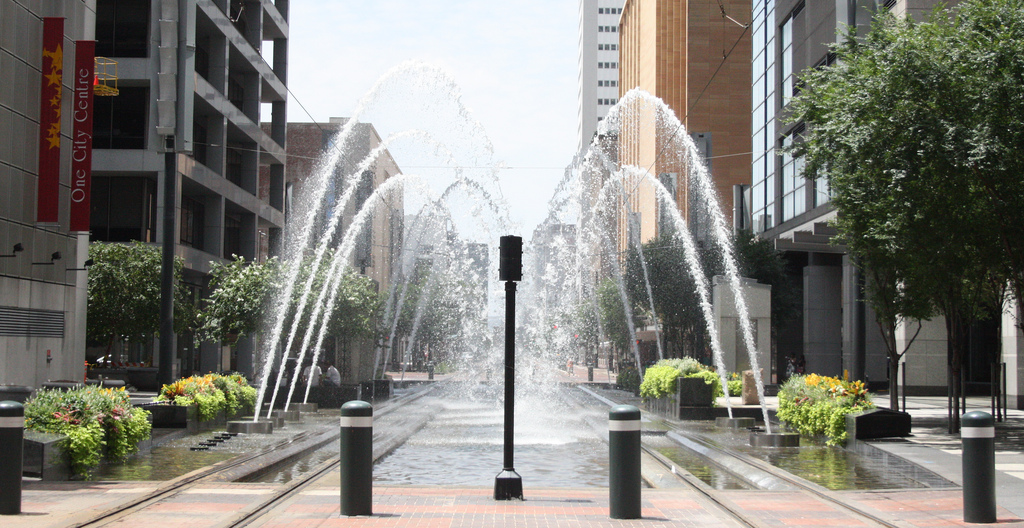